#NCC2021: A Sparkling Heritage – The History of the Gin Fizz

As we head into the final stages of the UKBG’s National Cocktail Competition 2021, we sit down with UKBG Curator, Luca Rapetti, to learn a little bit more about our final’s category theme – the Gin Fizz – an intriguing cocktail category with over a century of history.

“Waiter, bring me a Gin Fizz

And make it stiff! One Gin Fizz

Every ten minutes is the proper thing

Such was the first accompanying description of the Gin Fizz in an early recipe, dating all the way back to 1880! This sets the tone and feel of the main features of this historic drink: being refreshing and to be mainly consumed on hot days. 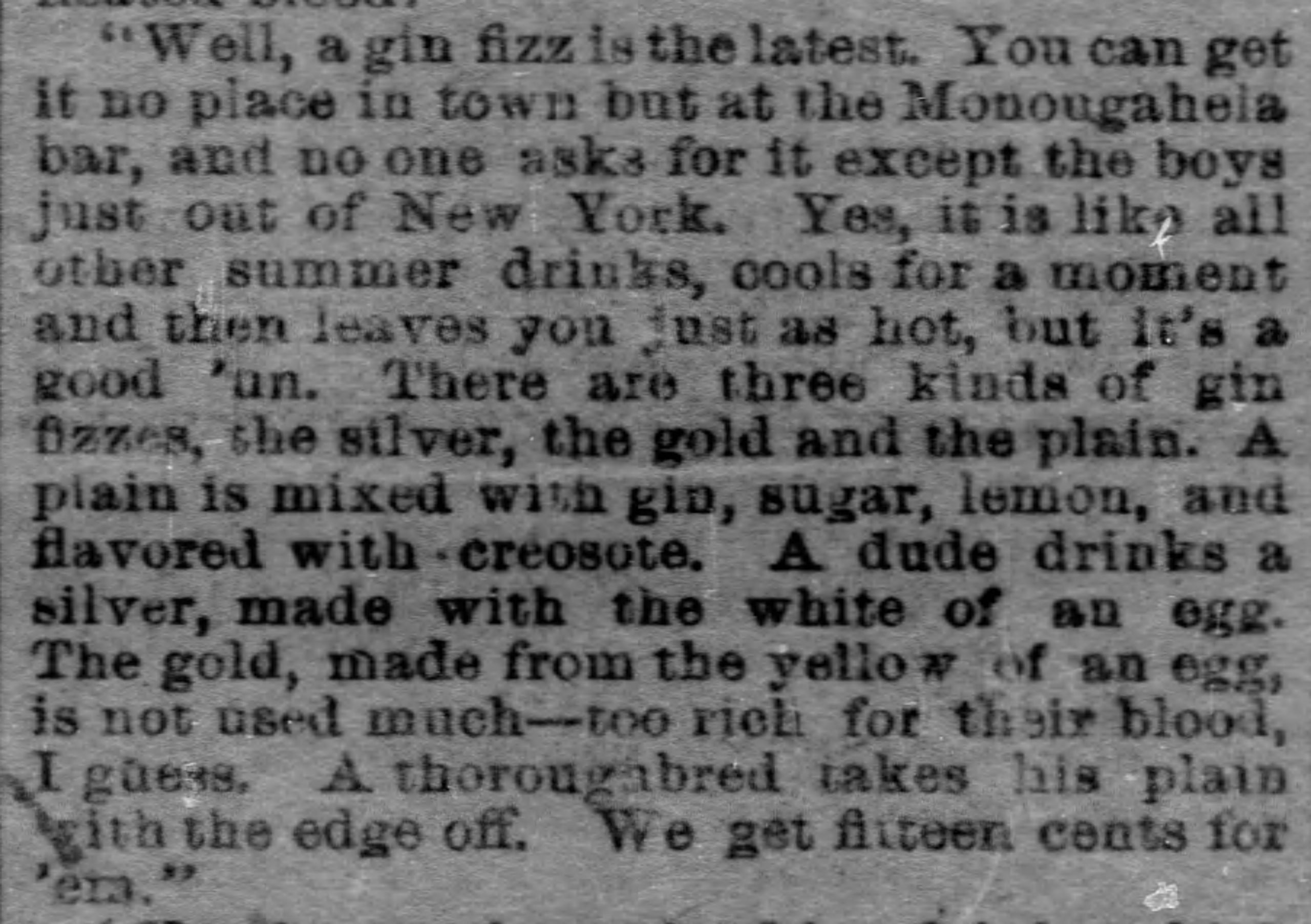 A clipping from the Pittsburgh Post Gazette (1883) describing three ‘new’ Fizzes and where to get them.

One of the first references of the Gin Fizz in print appeared in the “Star Tribune” newspaper in Minneapolis, USA in 1879. In the years following, two variations of the drink were born – namely the Silver Gin Fizz, which included egg white, and the Golden Fizz, which used egg yolk and imparted its rich golden colour.

Clipping from The Saint Paul Globe (1888, USA), one of the earliest print records of the Gin Fizz

The success of the Fizz was the result of it’s evolution from the ‘Fix’ – a drink already popular in the first half of the 1800s. The Fix was recorded in Jerry Thomas’ Bar-Tender’s Guide, published in 1862, which featured a simple but effective structure: an alcoholic base, lemon juice, sugar, ice, dilution with water and garnished with seasonal fruit. The ‘Fizz’ simply replaced the still water with soda, making the drink sparkling and more refreshing.

Towards the end of the 1800’s the Gin Fizz became increasingly popular. So much so, that famed bartender, Harry Johnson was one of the first to include it in his 1882 edition of The Bartender’s Manual, specifying the use of Old Tom Gin and “Vichy or Seltzer” for the sparkling component.  In the same period, William Schmidt, author of “The Flowing Bowl” and considered a bartending-star in late 1800s New York, had also become an expert mixer of the Gin Fizz – becoming featured in one of the biggest regional newspapers of the time, ‘The Saint Paul Globe’ in 1888. 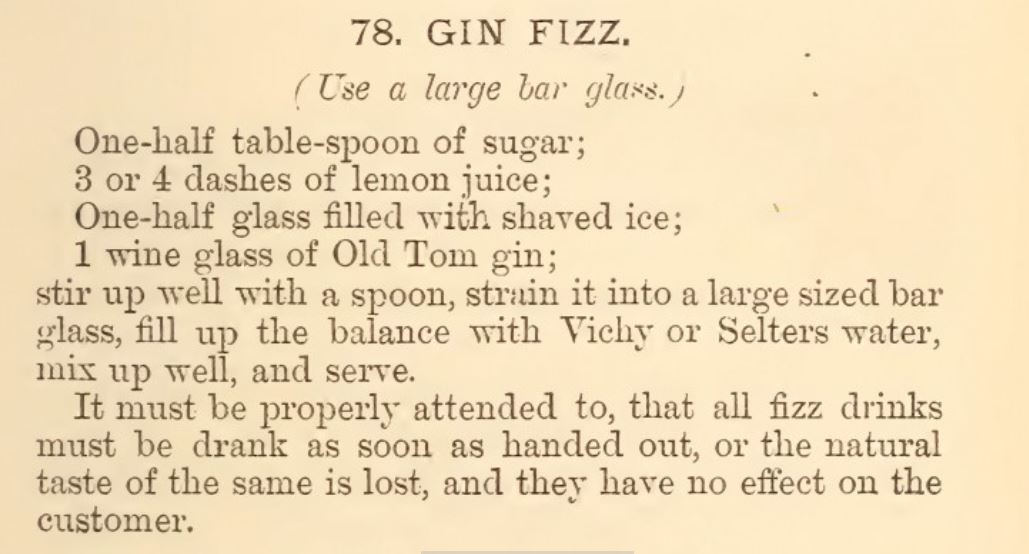 Soon after, Charlie Paul, author of  “American &Other Drinks” a bartender who had worked across Europe, became one of the first on the continent to popularise the Gin Fizz recipe and identify the “Fizz” as a category of drink. 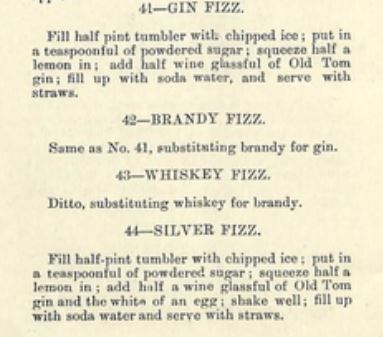 Of course, one of the greatest contributions to the fame of the category can be attributed to the Ramos Gin Fizz – concocted by Henry C. Ramos in his New Orleans saloon, Imperial Cabinet. In a short time, the recipe spread across the USA and across the Atlantic under a number of names – including the “New Orleans Fizz“.

As history rolled on into the roaring 1920s, Europe witnessed the arrival of many bartenders who had left the US – partly due to the effects of the Great Depression, but mainly due to the brutal effects of the Prohibition Era. With them they, bought recipes which deeply influenced the cocktail cultures of many European capitals, one of which was London. The knowledge of “American-style cocktails” was the winning weapon of these professionals, who settled in the most prestigious cocktail bars and hotel bars of the city, proposing new combinations of ingredients that were immediately successful among their customers. 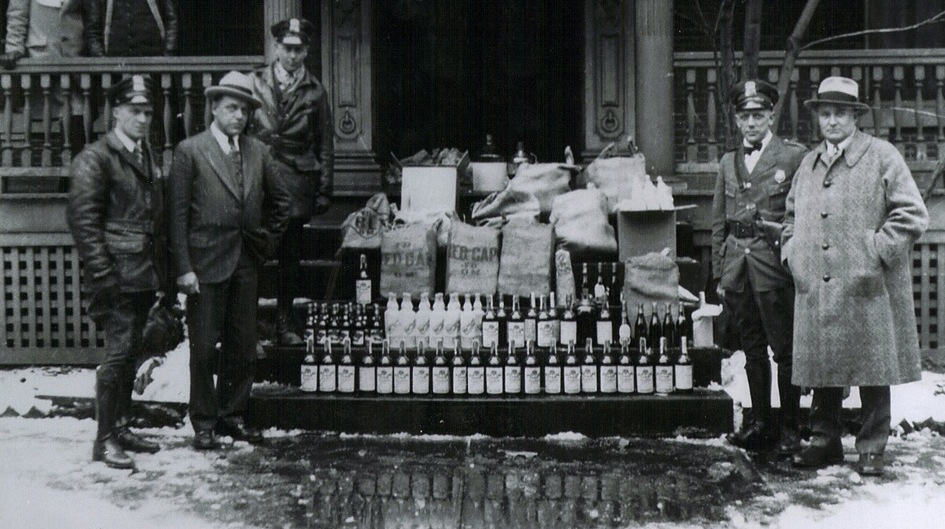 A Prohibition Era Bust in America (1930s). Prohibition ended up driving an increase in criminality and dangerous drining habits, driving many bartenders to Europe.

With “Cocktails How To Mix Them” (1922), Robert Vermeire of the Embassy Club outlined eight recipes of the Fizz, one of them the Morning Glory Fizz, still known and mixed by many around the world. 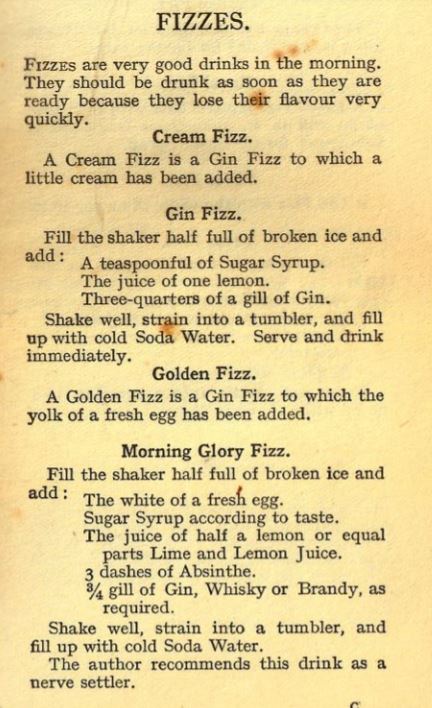 Clipping from Robert Vermeire’s ‘Cocktails: How To Mix Them’ (1922)

I would be remiss not to mention the contribution of Harry L. Craddock, the first UKBG President and Head Bartender of the American Bar at the Savoy in our historical rundown. Craddock was probably the one who developed and included more Fizz recipes than anyone else – 27 in total – in his ‘Savoy Cocktail Book‘. His recipes included different spirits, including Calvados, and also little-known ingredients, such as Swedish Punsch.  In doing so, Craddock demonstrated the incredible versatility of the Fizz. 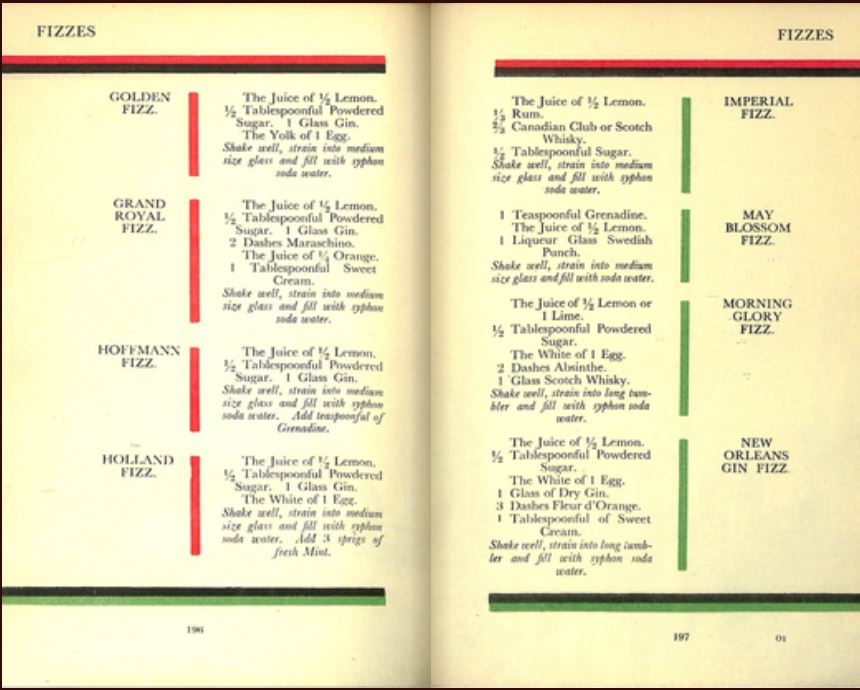 One of the most famous Fizzes and still widely requested, especially by British customers, is the Buck’s Fizz – created in London by resident bartender Malachi MacGarry of Buck’s Club, located in Mayfair. Despite its status in contemporary British pop-culture, it’s still a wonderfully fresh and uplifting recipe and a great example of the category.

When the UKBG was founded in 1934, one of the Guild’s main goals was to collect and catalogue as many cocktail recipes as possible, creating a cocktail database available for its members – something that we are continuing to do this day! When our organisation published “UKBG Approved Cocktails” (1937), there were six recipes of the Fizz: Brandy Fizz, Green Fizz, Louisiana Fizz (a similar structure to the Ramos Fizz, but omitting the soda and a few other ingredients), Gin Fizz, Silver Fizz and Golden Fizz.

In the same year, Billy Tarling, head bartender at the Cafè Royal in London and member of the first board of the UKBG, published his manual “Cafè Royal Cocktail Book Coronation Edition” – which is the foundation on which our National Cocktail Competition 2021 Grand Final draws from. One great historical note about the book, was that Tarling dictated that all proceeds from book sales would fund to the UKBG Sickness Benefit Fund and The Cafè Royal Sports Club Fund – mutual funds that provided assistance to bartenders and bar workers experiencing hardship. Seven years later prompted by Craddock, Tarling dedicated a section of the newer editions of the book to the Fizz, preceded by the Fix. It contains many variations of this drink, oincluding the Daiquiri Fizz, practically a Rum Fizz based on Daiquiri Rum, a Cuban rum produced in Puerto Rico.

Undoubtedly the Fizz, and of course the Gin Fizz, embodies almost 150 years of history – following stories of immigration, ambition and a world in constant change. Yet today, it continues to be celebrated and innovated upon – a true icon in the modern cocktail era.

Luca Rapetti is the UKBG’s Curator, and Bar Manager at Gong Bar (Shard, London). As well as a distinguished career in London’s bar scene, Luca is a bar culture historian, writing for several publications. Learn more about Luca and the rest of the UKBG team here.